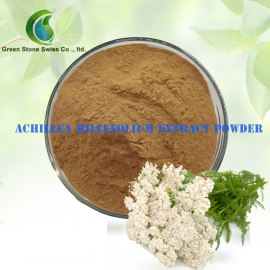 Achillea millefolium, commonly known as yarrow /ˈjæroʊ/ or common yarrow is a flowering plant in the family Asteraceae. It is native to temperate regions of the Northern Hemisphere in Asia, Europe, and North America. It has been introduced as a feed for livestock in places like New Zealand and Australia, where it is a common herb of both wet and dry areas, such as roadsides, meadows, fields and coastal places.

In New Mexico and southern Colorado, it is called plumajillo (Spanish for 'little feather') from its leaf shape and texture. In antiquity, yarrow was known as herbal militaris, for its use in stanching the flow of blood from wounds. Other common names for this species include gordaldo, nosebleed plant, old man's pepper, devil's nettle, sanguinary, milfoil, soldier's woundwort, thousand-leaf, and thousand-seal.

Yarrow grows from sea level to 3,500 meters (11,500 ft) in elevation. The plant commonly flowers from May to July. Common yarrow is frequently found in the mildly disturbed soil of grasslands and open forests. Active growth occurs in the spring. The Yarrow Flower Plant is native to Eurasia and is widely distributed in the UK and China.

-  The Yarrow Flower Plant has a strong, sweet aroma similar to chrysanthemum, Additive for making tea or beverages.
-  To increase urine flow; Liver and gallbladder conditions; topically for wounds, cuts, and abrasions.

Opopanax, also known as opobalsam, refers to a number of gum resins, including the one from A. millefolium. It is traditionally considered to have medicinal properties. Some pick-up sticks are made of yarrow.

In the Middle Ages, yarrow was part of a herbal mixture known as gruit used in the flavoring of beer prior to the use of hops. The flowers and leaves are used in making some liquors and bitters.

See also: List of plants in The English Physitian

A. millefolium has seen historical use as in traditional medicine, often because of its astringent effects.The herb is purported to be a diaphoretic, astringent, tonic, stimulant and mild aromatic. It contains isovaleric acid, salicylic acid, asparagin, sterols, and flavonoids. The genus name Achillea is derived from mythical Greek character, Achilles, who reportedly carried it with his army to treat battle wounds. This medicinal use is also reflected in some of the common names mentioned below, such as staunchweed and soldier's woundwort.

Yarrow and its North American varieties were traditionally used by many Native American nations across the continent. The Navajo historically considered it a "life medicine" and chewed the plant for toothaches and used its infusions for earaches. The Miwok in California use the plant as an analgesic and head cold remedy.

Common yarrow is used by Plains Indigenous peoples, such as the Pawnee, who use the stalk for pain relief. The Cherokee drink a tea of common yarrow to reduce fever and aid in restful sleep.

The occidentalis variety is used medicinally by the Zuni people. The blossoms and root are chewed and the juice applied before fire-walking or fire-eating. A poultice of the pulverized plant is mixed with water and applied to burns.

The Ojibwe people historically sprinkled a decoction of yarrow leaves on hot stones and inhaled it to treat headaches, as well as applied decoctions of the root onto skin for its stimulant effect. They also smoked its florets for ceremonial purposes, as well as placed them on coals and inhaled their smoke to break fevers.