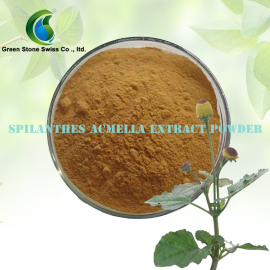 Spilanthes acmella, a well known antitoothache plant with high medicinal usages, has been recognized as an important medicinal plant and has an increasingly high demand worldwide. From its traditional uses in health care and food, extensive phytochemical studies have been reported. This review provides an overview and general description of the plant species, bioactive metabolites and important pharmacological activities including the preparation, purification and in vitro large-scale production. Structure-activity relationships of the bioactive compounds have been discussed. Considering data from the literature, it could be demonstrated that S. acmella possesses diverse bioactive properties and immense utilization in medicine, health care, cosmetics and as health supplements. As a health food, it is enriched with high therapeutic value with high potential for further development.

Acmella oleracea is a species of flowering herb in the family Asteraceae. Common names include toothache plant, paracress, Sichuan buttons, buzz buttons, tingflowers and electric daisy. Its native distribution is unclear, but it is likely derived from a Brazilian Acmella species.

Spilanthes Acmella, commonly known as the toothache plant in folks, is well-known for its history of relieving pain. This beautiful plant is defined by its gold and red flowers and it is usually used in salad preparations and skincare products. It has been thought to help relieve the pain caused by various types of oral diseases. The plant has been traditionally used in Brazil as a common treatment for toothaches due to its analgesic and anesthetic properties.

Furthermore, compared with control group, a significant dose-dependent increase in PEI (penile erection index) was documented by researchers. The PEI was nearly 3 times higher in the Spilanthes group, dosed at 150 mg/kg bodyweight, and 4 times higher in the sildenafil citrate (a.k.a. Viagra) treated group during the treatment period.

Apart from that, spilanthes acmella extract is anti-wrinkle. As the body ages, the fibroblasts decreases and the extracellular matrix structure gets modified. These changes create a disorder in your collagen structure, which finally leads to an increase in wrinkles and a loss of firmness in the skin. By adding spilanthes acmella into your skincare plan, you can help to keep the skin looking firmer and reduce the appearance of wrinkles.