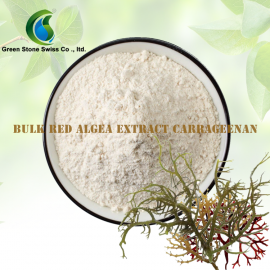 Carrageenans or carrageenins (/ˌkærəˈɡiːnənz/ karr-ə-gee-nənz, from Irish carraigín, "little rock") are a family of linear sulfated polysaccharides that are extracted from red edible seaweeds. They are widely used in the food industry, for their gelling, thickening, and stabilizing properties. Their main application is in dairy and meat products, due to their strong binding to food proteins. There are three main varieties of carrageenan, which differ in their degree of sulfation. Kappa-carrageenan has one sulfate group per disaccharide, iota-carrageenan has two, and lambda-carrageenan has three.

There are three main commercial classes of carrageenan:

Gelatinous extracts of the Chondrus crispus (Irish moss) seaweed have been used as food additives since approximately the fifteenth century. Carrageenan is a vegetarian and vegan alternative to gelatin in some applications or may be used to replace gelatin in confectionery.

All are soluble in hot water, but in cold water, only the lambda form (and the sodium salts of the other two) are soluble.

When used in food products, carrageenan has the EU additive E numbers E407 or E407a when present as "processed eucheuma seaweed". Technically carrageenan is considered a dietary fibre.

In parts of Scotland and Ireland, where it is known by a variety of local and native names, Chondrus crispus is boiled in milk and strained, before sugar and other flavourings such as vanilla, cinnamon, brandy, or whisky are added. The end-product is a kind of jelly similar to panna cotta, tapioca, or blancmange.

Chondrus crispus—commonly called Irish moss or "sea moss from other Caribbean Islands" or carrageen moss, although it is not a true moss (Irish carraigín, "little rock")—is a species of red algae which grows abundantly along with the rocky parts of the Atlantic coast of Europe and North America. In its fresh condition, this protist is soft and cartilaginous, varying in color from a greenish-yellow, through red, to a dark purple or purplish-brown. The principal constituent is a mucilaginous body, made of the polysaccharide carrageenan, which constitutes 55% of its dry weight. The organism also consists of nearly 10% dry weight protein and about 15% dry weight mineral matter and is rich in iodine and sulfur. When softened in water it has a sea-like odor and because of the abundant cell wall polysaccharides, it will form a jelly when boiled, containing from 20 to 100 times its weight of water.

C. crispus is an industrial source of carrageenan, which is commonly used as a thickener and stabilizer in milk products such as ice cream and processed foods, including lunch meat. In Europe, it is indicated as E407 or E407b. It may also be used as a thickener in calico printing and paper marbling, and for fining beer or wine. Irish moss is frequently used with Mastocarpus stellatus (Gigartina mamillosa), Chondracanthus acicularis (G. acicularis), and other seaweeds, which are all commonly found growing together. Carragheen and agar-agar are also used in Asia for gelatin-like desserts, such as almond jelly. Presently, the major source of carrageenan is tropical seaweeds of the genera Kappaphycus and Eucheuma.

In Ireland and parts of Scotland (where it is also known as (An) Cairgean in Scottish Gaelic), it is boiled in milk and strained, before sugar and other flavorings such as vanilla, cinnamon, brandy, or whiskey are added. The end product is a kind of jelly similar to pannacotta, tapioca, or blancmange. Similarly, in Jamaica and Trinidad and Tobago, Gracilaria spp. are boiled with cinnamon and milk to make a thick drink called Irish moss that is believed to be an aphrodisiac. In Venezuela, it has been used for generations as a home remedy for sore throat and chest congestion, boiled in milk and served with honey before bed.

Irish moss is commonly used as a clarifying agent or finings in the process of brewing (beer), particularly in homebrewing. A small amount is added to the kettle or "copper", where it is boiled with the wort, attracting proteins and other solids, which are then removed from the mixture after cooling along with the copper finings.

Eucheuma denticulatum is a species of red algae and one of the primary sources of iota carrageenan. It exists naturally in the Philippines, tropical Asia, and the western Pacific, but for the commercial extraction of carrageenan it is usually cultivated. The species is commonly known as E. spinosum when cultivated and can be found in different colours: brown, green and red.

Cultivation of Eucheuma started in the Philippines in the early 1970s and has since been introduced to many other locations with varying results. There are different methods of cultivating E. denticulatum. One of the more common ones is the off-bottom "tie-tie"-method, with the setup being two stakes driven into the sediment with a rope between them. Pieces of the seaweed are then tied to the rope at regular intervals and allowed to grow for 6 weeks, after which it is harvested and dried.

Kappaphycus alvarezii, the elkhorn sea moss, is a species of red algae. It is one of the most important commercial sources of carrageenans, a family of gel-forming, viscosifying polysaccharides. Farming methods affect the character of the carrageenan that can be extracted from the seaweed.

This alga grows to two meters long and is green or yellow in color. It is very fast-growing, known to double its biomass in 15 days.

Different carrageenan types differ in composition and conformation, resulting in a wide range of rheological and functional properties. Carrageenans are used in a variety of commercial applications as gelling, thickening, and stabilizing agents, especially in food products such as frozen desserts, chocolate milk, cottage cheese, whipped cream, instant products, yogurt, jellies, pet foods, and sauces. Aside from these functions, carrageenans are used in pharmaceutical formulations, cosmetics, and industrial applications such as mining.[2] Carrageenan is extracted from this seaweed in two ways. In native extraction, the seaweed is made into an aqueous solution, and the residue is filtered, leaving nearly pure carrageenan. The alkaline-modified method is less expensive and easier. The seaweed is mixed in an alkali solution, leaving a mixture of carrageenan and cellulose that can be sold as semirefined carrageenan. K. alvarezii is affected by ice-ice, a disease that severely reduces its yield.

Seaweeds are usually harvested manually by fishermen in low depths at low tides or by diving using appropriate equipment. After being harvested, seaweeds are placed under the sun to dry until they reach a humidity level that is ideal for processing.

Send us an email and we will let the sales answer questions about the ex-factory price and availability.