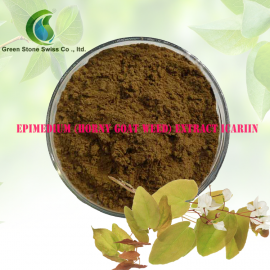 Other genus names of Epimedium:

In the application of traditional Chinese medical science, the product is used to nourish kidney to improve male sexual function, to relieve rheumatic pains and cold,  is used for the treatment of impotence, dribbling urination, contracture and spasm of bones and muscles, hemiplegia, lassitude in loin and legs, arthralgia due to wind-dampness and numbness of limbs.

According to recent studies, epimedium contains icariin, Icariin causes more blood to flow to the penis and could theoretically work better and cause fewer side effects than current drugs for erectile dysfunction. Animal, human, and in vitro studies indicate that icariin also stimulates osteoblast activity in bone tissue, and therefore can treat osteoporosis.

As we all know, organic epimedium extract is mainly used to deal with sexual performance problems, such as erectile dysfunction (ED) and low sexual desire. Apart from that, it can be used to treat weak back and knees, joint pains, arthritis, mental and physical fatigue, memory loss and many other conditions.

Icariin is sometimes regarded as the primary active ingredient of Epimedium extracts, and it can help people keep healthy. Due to its capability of activating osteoblast activity in bone tissue which might play a therapeutic role in the treatment of osteoporosis. It can also increase the number of kidney patients in T cells, lymphocyte transformation rate, antibody, antigen. More importantly, it can affect various aspects of aging mechanisms, such as extending the growth period, regulating the immune system, and improving metabolism and organ function. Besides that, it can treat myocardial ischemia induced by vasopressin and significant high blood pressure.