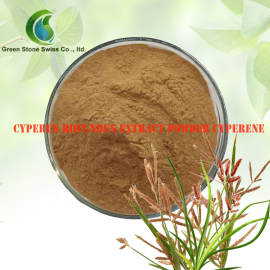 The plant is mentioned in the ancient Indian ayurvedic medicine Charaka Samhita (circa 100 AD). Modern ayurvedic medicine uses the plant, known as musta or musta moola churna, for fevers, digestive system disorders, dysmenorrhea, and other maladies.

Arabs of the Levant traditionally use roasted tubers, while they are still hot, or hot ashes from burned tubers, for wounds, bruises, and carbuncles. Western and Islamic herbalists including Dioscorides, Galen, Serapion, Paulus Aegineta, Avicenna, Rhazes, and Charles Alston have described its use as a stomachic, emmenagogue, and deobstruent, and in emollient plasters.

The antibacterial properties of the tubers may have helped prevent tooth decay in people who lived in Sudan 2000 years ago. Less than 1% of that local population's teeth had cavities, abscesses, or other signs of tooth decay, though those people were probably farmers (early farmers' teeth typically had more tooth decay than those of hunter-gatherers because the high grain content in their diet created a hospitable environment for bacteria that flourish in the human mouth, excreting acids that eat away at the teeth).

Several chemical substances have been identified in C. rotundus: cadalene, cyprotene, flavonoids, sesquiterpenes, terpenoids, mustakone, isocyperol, acyperone, rotundene, valecine,kaempferol, luteolin, quercetin, patchoulenone, isopatchoulenone, sugeonyl acetate, cellulose triacetate and sugebiol. A sesquiterpene, rotundone, so called because it was originally extracted from the tuber of this plant, is responsible for the spicy aroma of black pepper and the peppery taste of certain Australian Shiraz wines.

Extract from leaves and tubers of Cyperus rotundus L. increase the adventitious rooting of different species. These extracts contain a large amount of auxins and phenolic compounds that promote the rooting of cuttings and seedlings.

A Cyperus rotundus tuber, approximately 20 mm long
Despite the bitter taste of the tubers, they are edible and have nutritional value. Some part of the plant was eaten by humans between Mesolithic and Neolithic periods.The plant has a high amount of carbohydrates. The plant is eaten in Africa in famine-stricken areas.

In addition, the tubers are an important nutritional source of minerals and trace elements for migrating birds such as cranes.

The well dried coco grass is used in mats for sleeping.

Nutgrass Galingale Rhizome is the dried rhizome of Cyperus rotundus L. (Fam. Cyperaceae).
Functions: To remove stagnation of qi, regulate menstruation and relieve pain.
Indications: Stagnation of the liver qi characterized by distending pain in the chest, hypochondria, and epigastrium, indigestion, feeling of stuffiness in the chest and epigastrium, abdominal colic, distending pain in the breast, menstrual disorders, amenorrhea or dysmenorrhea.