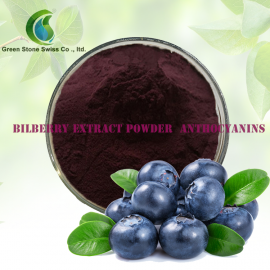 Bilberries are basically the European version of the American blueberry. Bilberries are grown in Europe, Canada and the U.S. and extracts of the ripe berry are known to contain flavonoid pigments known as anthocyanins - which act as powerful antioxidants. Modern laboratory studies on bilberry extract have confirmed a number of activities including antioxidant effects, an ability to inhibit aggregation of blood platelets (reduce stickiness, hence a tendency to clotting of blood cells), produce a slight relaxation effect on vascular smooth muscles, and a possible role in reducing factors associated with chronic inflammatory diseases.

The common feature of bilberry and blueberry for eye protection is They all contain anthocyanins that the strong antioxidant properties of anthocyanins, can strengthen the elasticity of the eye microvessels, promote blood circulation, maintain normal eye pressure, and thus improve vision.

The amount of anthocyanins and other nutrients in blueberries is several times higher than that of blueberries. The reason is that the Nordic is close to the North Pole, and the white nights are longer. It also determines that the health benefits of bilberry for the eyes are much higher.

Both bilberry and blueberries have fruits that are round and dark, ranging from a dark blue to nearly black. Bilberry produces single berries at the point where the leaf meets the stem on new shoots. Blueberries, by contrast, produce clusters of berries, and highbush and lowbush blueberries produce fruits on year-old stems, resulting in a relatively high yield per bush.

- Commonly used in Tea, Smoothies, and Jam.
- Antioxidants help to preserve the body and fight off viruses, infections, and inflammations.
- Helpful for supporting healthy blood sugar levels, Bilberry is also used due to its beneficial effects in improving blood circulation, maintain healthy cholesterol levels, and as a relief for nausea and indigestion.
- They are also known to be helpful for maintaining joint health, kidney, and urinary tract health, as well as supporting healthy menstruation and digestive health.