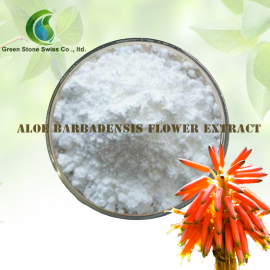 Today, I’d like to share some knowledge of the functions of aloe vera flower and a special aloe flower---Aloe Barbadensis flower.

At first, let's talk about the Application of the aloe flower.

1. Aloe vera flower can be processed into soap, lubricating oil and other articles for daily use.

4. Aloe vera flower can be used for maintaining beauty, keeping young, nourishing yin, and promoting blood circulation, mainly for some women with pretty much toxins in the body as it can remove toxins, and whiten skin.

The effects of aloe vera flowers on cosmetics is amazing. It has the following skincare effects.

1. Whitening: Natural anthraquinone glycoside is a natural whitening and sunscreen ingredient in Aloe vera, which can effectively prevent ultraviolet light from stimulating the activity of tyrosinase and stop the formation and deposition of melanin. Therefore, it has good effects of brightening skin, eliminating dark yellow complexion, and whitening.

2. Dispel freckles: Aloe vera contains amino acids and vitamins that the body cannot synthesize itself, which can effectively stabilize melanin-active enzymes. It can decompose and inhibit the activity of enzymes, promote the rapid decomposition and metabolism of formed melanin, prevent melanin from forming again, thus achieving the effects of whitening and dispelling freckles.

3. Anti-aging/anti-wrinkle: Superoxide dismutase (SOD) with aloe polysaccharide as the core has an important role in scavenging free radicals, preventing cell aging and treating chronic allergies. It can also accelerate the cells to divide and revitalize, and can quickly penetrate into the basic layer of human skin; meanwhile, it is capable of promoting the activation of skin cells, delaying cell aging, and restoring skin elasticity and firmness.

6.Moisturizing and hydrating: Aloe vera can form a thin layer of breathable film on the surface of the skin while penetrating deep into the skin, blocking the evaporation of skin moisture. The polysaccharide components and amino acids after infiltration into the skin have very obvious hydrating, moisturizing, and softening effects, enhancing the adsorption and water repellency of the stratum corneum so that the skin that loses elasticity and the dry stratum corneum quickly achieve the effect of activation and water filling, thus restoring the original smoothness, softness and good elasticity of the skin.

In addition to the efficacy and function of ordinary aloe flower, it also has the following effects:

1.A quite effective cure for cold and cough.
I have been weak and sick for a long time, and I often cough at night. A traditional Chinese doctor recommended that I drink aloe vera tea, and then I have been drinking it which has a very good effect for improving immunity. I specially searched it in Baidu Encyclopedia. No sooner it was delivered to us than I boiled it with some crystal sugar for kids. The taste was still as fragrant as that of several years before. My elder son took aloe flowers to cure his cough caused by lung heat, which was proved effective. However, aloe flowers are sometimes so rare that we haven't got it for more then a decade!

2. Effects of detoxification, clearing the fat, and protecting liver
Aloe vera flower tea has a good effect on detoxifying, clearing fat and relieving liver. Because of the need to engage in social activities in work regularly, after drinking too much, you can go home and drink a cup of aloe vera tea. You can feel much better just after drinking it and your head won't hurt next day. It's indeed a bit expensive that a pack of Aloe vera flower tea is not enough for a long-time consumption.

3. The role of loosening bowel to relieve constipation
Aloe vera flowers are still very tasty, and its taste is quite strong. I usually buy it for my mother because she has the habitual constipation,  frequent intestines, and abdominal pain. After drinking this, she said that it was very effective for moistening the dry digestive apparatus, and wanted to buy some later.

-   Can improve the body's ability to resist disease. Many chronic diseases such as asthma, gout, high blood pressure, etc., if an appropriate combination of aloe vera flowers during treatment, will increase the efficacy and help the recovery of the body.

-  The molecular weight of Aloe Barbadensis polysaccharide is up to 450,000, which is more than 40 times that of Aloe vera.