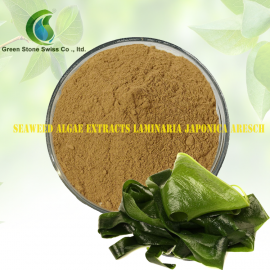 Laminaria is a genus of 31 species of brown algae commonly called "Kelp", Kelps are large brown algae seaweeds that make up the order Laminariales. There are about 30 different genera.

Different expressions of “Kelp” in Chinese are often confused and abused. In the traditional Chinese herbal literature, Kelp is also called "Kunbu" and "Jiangbaicai". These words cannot accurately correspond to a single species so they are common names of kelp. It is common in historical documents that many substances with the same name are different species.

A laminaria stick may be used to slowly dilate the cervix to induce labor and delivery, or for surgical procedures including abortions or to facilitate the placement of an intrauterine device. The stick is made up of a bundle of dried and compressed laminaria that expands as water is absorbed.

Laminaria is a source of the relatively rare element, iodine, which is commonly used to promote thyroid health. Kelp is used in the treatment of underactive thyroid glands. People who are overweight due to thyroid trouble may benefit from this herb like reducing their weight. The iodine in the kelp helps maintain a healthy thyroid, nutrients, and oxygen increase the body's ability to burn fat when exercising.

Certain carbohydrates such as mannitol, laminarin, and alginate can be extracted from laminaria. Mannitol is used to decrease high intraocular pressure, and to lower excessive intracranial pressure. Laminarin has two forms, soluble and insoluble. The soluble form of Laminarin has high antitumor activity, can be used in the treatment of antibiotic-resistant nosocomial infections, can aid in normalizing enteric metabolism, helps to improve enzymatic processes of the intestine and does not possess antigenic or pyrogenic properties. Laminarin continues to be of active study in today’s medical field.

Kelp Extract contains three main active ingredients: iodine, alginic acid, and fucoidan. The iodine in Kelp helps those people deficient in this trace mineral to regulate and improve thyroid function, thus it is beneficial for hypothyroidism and goiter. It is anti-inflammatory and possesses anti-rheumatic properties to relieve arthritis and rheumatism. It's anti-bacterial properties help ward off bacteria and viruses. The alginic acid, a type of dietary fiber, is used in relieving constipation, diarrhea, and heartburn. The fucoidan, another type of fiber, contributes to lowering cholesterol and glucose levels.

Various species of Laminaria have been used for food purposes since ancient times wherever humans have encountered them. Typically, the prepared parts, usually the blade, are consumed either immediately after boiling in broth or water, or consumed after drying. The greater proportion of commercial cultivation is for algin, iodine, and mannitol, which are used in a range of industrial applications. In South Korea it is processed into a sweetmeat known as laminaria jelly, in other countries it is also used in fresh salad form, which is also canned for preservation for deliverу and selling purposes in other regions. Many countries produce and consume laminaria products, the largest being China.

Kelp is rich in the constituents, such as algin, mannitol, carotene, zeaxanthin, iodine, fucoidan, and bromine. It is thought to benefit the relief of rheumatism and rheumatoid arthritis (internally and externally applied to inflamed joints).

Algae extract is known for its non-irritating and non-comedogenic moisturization properties (some forms of algae extract are not so beneficial). Algae Extract helps provide additional protection from irritation.

Algae extract is derived from Freshwater algae and seaweeds. Algae extract is rich in vitamins and trace elements. It helps to rebalance the skin's moisture content while protecting, stimulating, and nourishing the skin. It is an active substance, which normalizes the skin's moisture content and provides suppleness for the epidermis. It consists of vital elements that increase surface hydration. In cosmetics, the algae extract is used for its water-binding and antioxidant properties. Among the various nutritional supplements found in algae extract, supplements which enhance skin health are as follows: bioflavonoids and threonine are immune system boosters that remove toxins from skin cells and improve skin color; silicon brings about skin tightening; serine enhances skin beauty, and omega-6 fatty acids help improve skin tone.

Algae extract has an anti-inflammatory effect and reduces scars. Anti-inflammatory substances allow the skin to heal itself and also prevent new scarring. Algae extract is non-irritating and has non-comedogenic moisturization property, which helps provide additional protection from irritation. It is also very effective in reducing wrinkles. It has powerful antioxidant properties. It brings about an immediate skin-tightening effect and also long-term anti-wrinkle effect by protecting skin cells from oxidative stress and strengthening the skin's connective tissue by stimulating collagen synthesis and renewal of tissue cells. Algae extract is also used in cellulite-reducing creams.

Algae Extract contains polysaccharides (sugars) that act as natural humectants (helps to promote the retention of moisture in the skin); alginates (components that provide moisture and elasticity to the skin); fucoidans (the sulfated polysaccharides that stimulate circulation); polyphenols (antiseptic ingredient, anti-inflammatory agents and anti-oxidants); and fucosterol (an excellent emollient, blood stimulant, diuretic and moisturizing agent).

These ingredients are all main used for nutrition and health care

The following uncommon seaweed algae extracts can be customized

Rhodysterol is a mixture of propylene glycol diethylhexanoate and gelidium cartilagineum (a red seaweed) extract, and the rationale of its use in slimming solutions is that seaweeds transform lipids to energy but surplus lipids are saved right until its essential use.

There is a mechanism for the storage and release of lipids in the alga. In order to meet the energy need of the algal celle, lipids are transformed to energy and the excess is stored. The reserved lipids are used by the algae in periods of stress, exposed to cold shine for a week (reducing photosynthsis). The agents which transmit the messages to instigate lipolysis are sterols or derivatives and are particularly active in the Rhodophyta or red algae. Rhodysterol contains 1.5% of active sterol and is recommended for use as a lipolytic and firming agent. It can promote the blood circulation, decompose adipose, make skin thin and compact, and help skin regeneration.

It is capable of reshaping the body through reducing the occurrence of cellulite in order to improve the appearance of the skin.

If you need it, please send us an inquiry to let us know your specific needs.