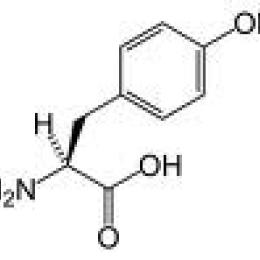 Product Description：
Tyrosine (abbreviated as Tyr or Y)or 4-hydroxyphenylalanine, is one of the 20 amino acids that are used by cells to synthesize proteins. It is a non-essential amino acid with a polar side group. The word "tyrosine" is from the Greek tyros, meaning cheese, as it was first discovered in 1846 by German chemist Justus von Liebig in the protein casein from cheese.
Functions :
Aside from being a proteogenic amino acid, tyrosine has a special role by virtue of the phenol functionality. It occurs in proteins that are part of signal transduction processes. It functions as a receiver of phosphate groups that are transferred by way of protein kinases (so-called receptor tyrosine kinases). Phosphorylation of the hydroxyl group changes the activity of the target protein.
A tyrosine residue also plays an important role in photosynthesis. In chloroplasts (photosystem II), it acts as an electron donor in the reduction of oxidized chlorophyll. In this process, it undergoes deprotonation of its phenolic OH-group. This radical is subsequently reduced in the photosystem II by the four core manganese clusters.