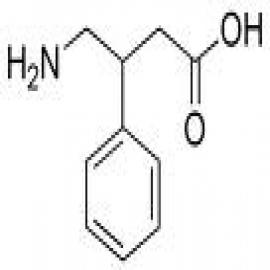 Product description  :
Phenibut is natural derivative of the inhibitory neurotransmitter GABA (Gamma amino butyric acid). Sold as a dietary supplement in the US while in Russia sold as a neuropsychotropic drug that is capable of passing the blood-brain barrier. Phenibut is cited as a nootropic for its ability to improve neurological functions. It was discovered in the Soviet Union in the 1960s, and has since been used there to treat a wide range of ailments including anxiety and insomnia.
Pharmacology ：
Structurally, phenibut is gamma-aminobutyric acid with a phenyl group in the beta position. It has structural similarities to baclofen and phenethylamine. Phenibut is a GABAB receptor agonist, with slight activity at GABAA receptors. It also is a beta-phenylethylamine antagonist and thus reduces the effects of phenylethylamine and other compounds that raise phenlethylamine levels .
Furthermore, it has shown to stimulate dopamine receptors. The pharmacological effects of phenibut are similar to baclofen, but less potent per milligram of dosage.