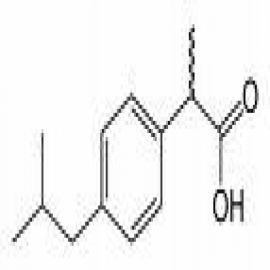 Product Description ：
Ibuprofen belongs to a group of medicines called non-steroidal anti-inflammatory drugs （NSAIDs）. It is used for relief of symptoms of arthritis, primary dysmenorrhea, fever, and as an analgesic, especially where there is an inflammatory component. Ibuprofen is known to have an antiplatelet effect, though it is relatively mild and short-lived when compared with that of aspirin or other better-known antiplatelet drugs. Ibuprofen is a core medicine in the World Health Organization's "Essential Drugs List", which is a list of minimum medical needs for a basic health care system. It works by blocking the action of a substance in the body called cyclo-oxygenase. Cyclo-oxygenase is involved in the production of various chemicals in the body, some of which are known as prostaglandins. Prostaglandins are produced in response to injury or certain diseases and would otherwise go on to cause pain, swelling and inflammation. Ibuprofen is therefore used to relieve pain and inflammation.