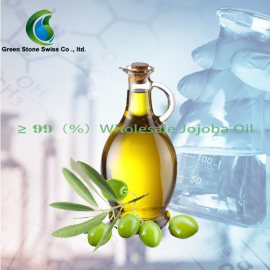 Jojoba oil is the liquid extracted in the seed of the Simmondsia chinensis (Jojoba) plant, a shrub, which has originally grown in southern Arizona, southern California, and northwestern Mexico. The oil takes up approximately half the jojoba seed by weight. The oil is rare because it is an extremely long (C36–C46) straight-chain wax ester and not a triglyceride, which makes jojoba and its derivative jojoba esters more similar to whale oil than to traditional vegetable oil. The possibility of its wide use for biodiesel fuel has been discussed. Jojoba cannot be cultivated on a scale to compete with traditional fossil fuels so its use is limited to personal care products.

The terms "jojoba oil" and "jojoba wax" are often used interchangeably because the wax visually appears to be a mobile oil. But as a wax it is composed almost entirely (~97%) of mono-esters of long-chain fatty acids and alcohols, accompanied by only a tiny fraction of triglyceride esters. Compared with true vegetable oils, the ingredient accounts for its extreme shelf-life stability and extraordinary resistance against high temperature.

It's commonly used to treat acne, psoriasis, sunburn and chapped skin. It's also used by people who are balding because it encourages hair regrowth. Because jojoba is an emollient, it soothes the skin and unclogs hair follicles. Many people know jojoba oil to be a carrier oil for essential oil uses, such as making skin and hair products, but it's actually an effective skin moisturizer and healer on its own.

Jojoba esters are the main ingredient of jojoba extract. They are also the hydrogenation or interesterification product of Jojoba oil. Interesterified Jojoba Esters are commonly used in cosmetic formulations as an emollient, due to its remarkable similarity to the natural oils produced by the human skin, and its high oxidative stability. Fully hydrogenated jojoba esters are usually small beads used to exfoliate the skin.

Physically, jojoba esters are an odourless, colourless liquid, white cream, or hard white wax, with melting points ranging from 15°C to 70°C. Their texture and crystallinity may be modified by rapid cooling, thus altering their cosmetic properties. Jojoba esters are very resistant to oxidation, more so than castor oil, coconut oil, macadamia oil, even many fractions of mineral oil.

Jojoba is grown commercially to produce jojoba oil, a liquid wax ester extracted from its seed.

In the cosmetic industry, jojoba oil is used as a substitute for whale oil and its derivatives, such as cetyl alcohol. The ban on importing whale oil to the US in 1971 led to the discovery that jojoba oil is "in many regards superior to sperm oil for applications in the cosmetics and other industries." Jojoba oil is found as an additive in many cosmetic products, especially those marketed as being made from natural ingredients. They commonly contain jojobas like lotions and moisturizers, hair shampoos and conditioners. It is worth mentioning that the pure oil itself may be used on skin, hair, and cuticles.

In the energy industry, jojoba biodiesel has been widely considered as a cheap, sustainable fuel that can be a replacement for petroleum diesel.

In the pharmaceutical industry, jojoba oil is a fungicide and can be used for controlling mildew.

However, jojoba oil cannot be casually eaten. Though jojoba oil is edible but non-caloric and non-digestible, meaning the oil will pass through the intestines unchanged and can cause a stool condition called steatorrhea.