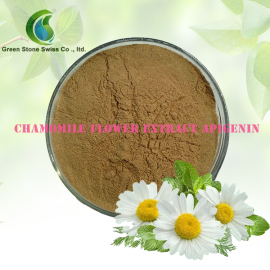 Chamomile tea is an herbal infusion made from dried chamomile flowers and hot water. Two types of chamomile used are German chamomile (Matricaria recutita) and Roman chamomile (Chamaemelum nobile). Chamomile may be used as a flavoring agent in foods and beverages, mouthwash, soaps, or cosmetics. When used as an herbal product, such as in tea or as a topical skin cream, chamomile is not likely to have significant health effects or major side effects.

The main constituents of chamomile flowers are polyphenol compounds, including apigenin, quercetin, patuletin, and luteolin.Essential-oil components extracted from the flowers are terpenoids. Chamomile is under preliminary research for its potential anti-anxiety properties. There is no high-quality clinical evidence that it is useful for insomnia.

Chamomile Extract is known for its soothing and skin conditioning qualities and is beneficial for dry skin, especially where there is redness or irritation. Chamomile Extract contains active Flavonoid and Essential Oil compounds, which are particularly advantageous in the care of sensitive skin. Anti-inflammatory properties due to the inhibition of histamine release, anti-free radical action, and inhibition of the superoxide radical synthesis are key. In addition, these compounds show remarkable vasodilator action, augmenting blood flow to the skin and soothing of irritation.